The city of Zagreb, capital of Croatia, on the historic and political threshold between East and West, illustrates both the continental and Mediterranean spirit of the nation it spearheads.

The city of Zagreb, capital of Croatia, on the historic and political threshold between East and West, illustrates both the continental and Mediterranean spirit of the nation it spearheads. Zagreb is the cultural, scientific, economic, political and administrative centre of the Republic of Croatia, and is home to the Croatian Parliament, Government and President. Its favourable location between the Pannonian plain, the edge of the Alps and the Dinaric range has allowed it to become a crossing point for mass international communication.
The city is protected from the cold northern winds by the mountain of Medvednica and opens up to the rest of the world thanks to a spacious plain and the Sava river. Zagreb, with a population of nearly one million, contains almost a quarter of the entire population of Croatia. Over the centuries, the city was inhabited by people coming from all over Europe; and, in recent years, by people coming from different parts of Croatia, ensuring a rich cultural life.
The façades of Zagreb’s buildings reflect the ebb and flow of history, while its streets and squares bear witness to the coming together of the many cultures that have shaped the identity of this laid-back capital. 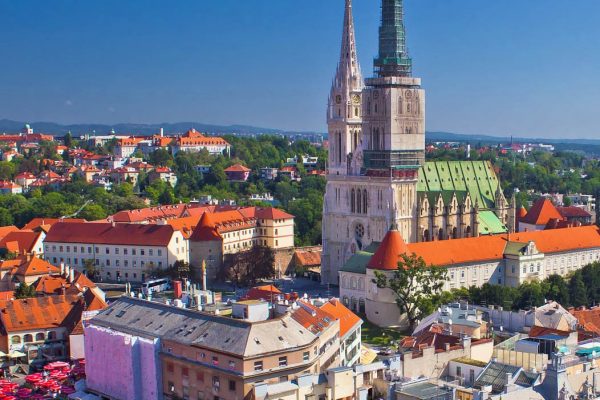 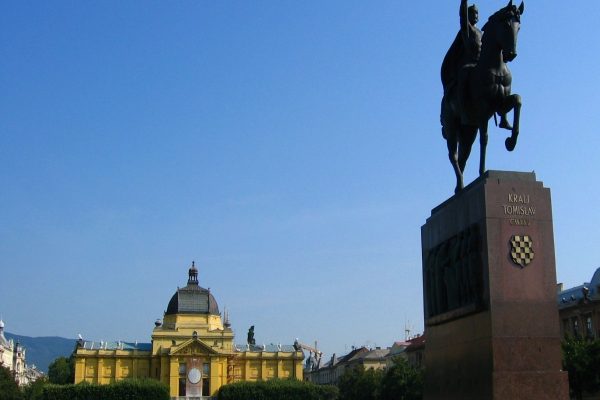 You can find spaces for recreation almost anywhere around Zagreb. Also within easy reach we find Medvednica, a popular destination for outings. Right in the city centre, parks, streets and squares intersect with green spaces and gardens. Landscaped in the 19th century, Strossmayer Promenade in the Upper Town is where you can enjoy a romantic panorama of Zagreb accompanied by the poet A.G. Matoš, in sculpture form. Further evidence of 19th-century urban planning is provided by the so-called Green Horseshoe. This line of eight green squares created by Lenuci serves as the axis of the Lower Town. One of the most popular is Zrinjevac, known for its row of plane trees brought in from Trieste more than a century ago. Fountains, a music pavilion and busts of notable figures take us back to that time.
There is also a meteorological display which citizens of Zagreb use to check the time, the daily temperature, local air pressure and humidity. Those arriving by train are first greeted by lovely views of King Tomislav square, named after the first Croatian king; the Art Pavilion and Zagreb Cathedral. The Art Pavilion, venue for special cultural events, was originally the Croatian Pavilion at the Millennium Exhibition in Budapest in 1896. Its innovative iron construction made it possible to transport it to its present location and for it to open to the Zagreb public two years later. Nearby nestles another green oasis, the Botanical Gardens, containing one of the most splendid plant collections in Europe, with some 10,000 varieties.
Behind the walls of the Cathedral you’ll find Ribnjak, ‘Fishpond’, a park where clergymen used to catch fish for their Friday meal. In the eastern part of the city stretches spacious Maksimir. Zagreb’s biggest park was landscaped in the 19th century, in what was considered the English style. It later became home to many animals when a zoo was opened here in the first half of the 20th century. Outside the limits of the city centre, up on the hill, stands the main cemetery of Mirogoj. Its monumental arcades, pavilions and domes were designed in the late 19th century by prominent architect Hermann Bollé. One of the most beautiful cemeteries in Europe and the resting place for many public figures, Mirogoj is a lovely park in its own right, as well as an open-air art gallery.

Zagreb enjoys a rich cultural life. Around 30 theatres are active in the city, some with regular programmes, some occasional. Along with some 30 museums, a large number of galleries and many theatre, music and dance festivals all combine to make Zagreb a city of art. From classical to alternative, from amateur to professional, from private to public, these different artistic outlets reflect the high level of cultural awareness. The Croatian National Theatre is the national home of ballet, opera and drama. Of all the concert halls, the most prominent is the Vatroslav Lisinski, named after the composer of the first Croatian opera. Operettas and musicals, rock and pop operas can be found in the Komedija Theatre; quick-witted humour and satire are staged at Kerempuh, and contemporary productions are shown at Gavella, ZKM, ITD, and EXIT.
The World Festival of Animated Film Animafest is the second oldest of its kind in Europe.
The Music Biennial, the Dance Week Festival and Eurokaz, an international festival of modern theatre, bring performers from around the world to the stages of Zagreb. As we have already seen, the history, art and culture of Zagreb, Croatia and Europe are reflected in the architecture around the city, as well as in its varied museums. The Archeological Museum contains the mysterious mummy of a woman from Thebes in Egypt, wrapped in linen – the longest text in Etruscan still to be decrypted. The Zagreb City Museum brings a modern interpretation of historical events in the city from prehistoric times to the present day. The Museum of Arts and Crafts was founded together with a school in the same discipline in the second half of the 19th century, both established to preserve the traditional values of craftsmanship. A unique collection from different areas and periods has been on display at the Mimara Museum since the University Games were held in Zagreb in 1987.
The Strossmayer Gallery of Old Masters houses a collection of works by famous painters and is an essential stop for connoisseurs of European art from the 15th to 19th centuries. Nearby we find the Modern Gallery, in which works by every significant artist from the 19th and the 20th centuries are exhibited. Zagreb has also entered the 21st century with a new building for the Museum of Contemporary Art, now opening to the public. In the Upper Town, the Klović Gallery is housed in a former Jesuit monastery. For emotion, raw life and symbolism, visit the Museum of Naïve Art, with its display of works by non-academic painters. Nearby is the Atelier Meštrović, a gallery where sculptor Ivan Meštrović used to live and create work that marked the 20th century just as profoundly as Rodin’s. The circular pavilion that is now the Hall of Croatian Artists was built on the basis of his idea.

Visa in not needed for EU citizens. Everyone else need a visa.

Blue is the colour of Zagreb. It is found on the coat of arms, on city trams, buses and the funicular, while the shirts of its sportsmen are also the same colour.
In addition, what used to be a branch of the Sava river is now the Jarun Recreational Sports Centre, built for the 1987 University Games.
Here you’ll find cycle paths, footpaths and sports courts for everyone to use – international rowing competitions take place on the lake. At Jarun there is also small patch of undisturbed nature, home to several hundreds of species of birds, fish, water animals and insects. A large catfish called Jura might just be an urban myth but anglers who fish here do hope to catch something big. In summer, Jarun is referred to as the Zagreb Sea, as its beaches fill with sun worshippers.
At the beginning of the year Zagreb hosts the Ski World Cup, justifying another of its names, White Zagreb. Only half-an-hour from the city’s main square of Ban Josip Jelačić we find the highest peak of Medvednica Mountain, Sljeme (1035 metres), which holds a special place in the hearts of the people of Zagreb. This is where famous Croatian skiers and siblings Ivica and Janica Kostelić trained for their many medals and trophies. Their promotion of the ski run at Sljeme led to it being included in the World Cup schedule. Sljeme is also a favourite place for outings, whatever the season.

The moment the sun appears in the sky in spring, restaurant, café and coffeehouse terraces open for custom. Streets become promenades, places to get a cup of coffee, relax or have a business meeting.
A combination of Mediterranean cordiality and northern business sense make any visitor feel welcome. The traditional International Folklore Festival, the global festival of street performers Cest is d’Best, outdoor summer concerts on Zrinjevac, St. Martin’s Day and many other open-air events increase the feeling of communality.
Lounging in cafés has been a long tradition in this city.
Preradović, also known as Flower Square, is loved by artists and young people, as well as an older crowd. Tkalčićeva, once the border between Gradec and Kaptol, used to be full of pubs and served as the red-light district, but nowadays it is a trendy destination for rendezvous and relaxation for the whole family.
In the Ilica is a funicular, the shortest funicular in the world for public transport with which it arrives to 55 seconds on the Upper Town. 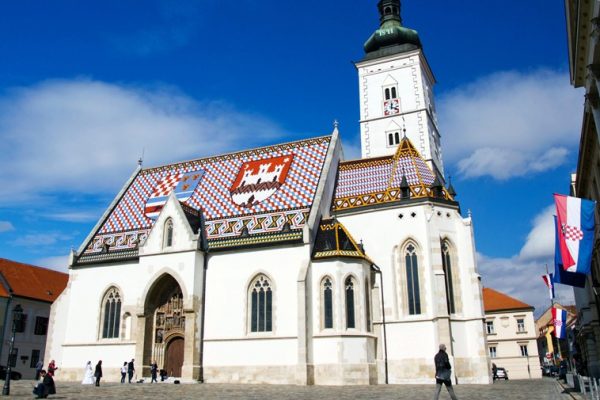 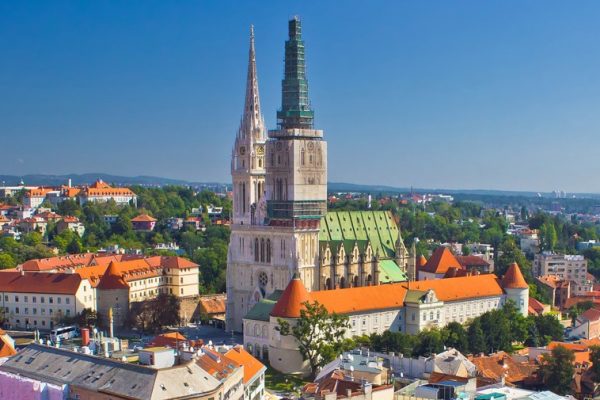 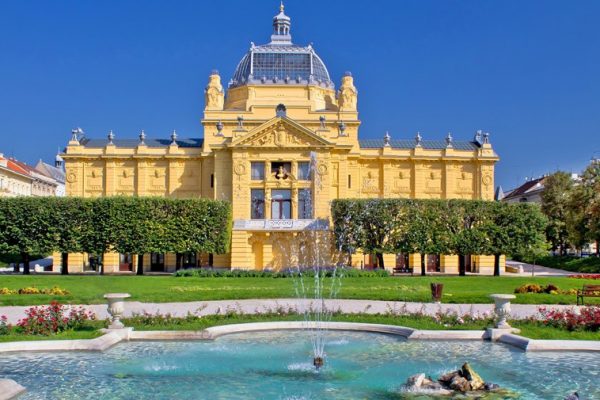 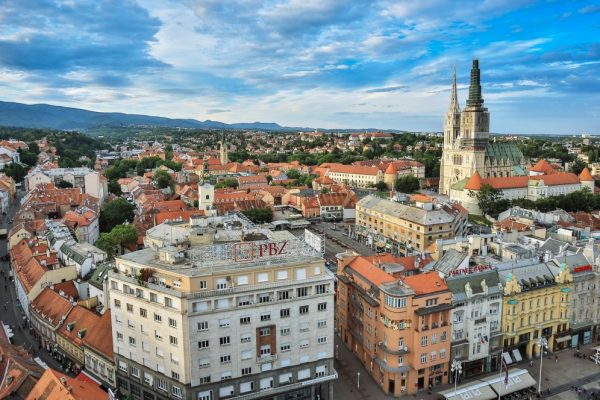 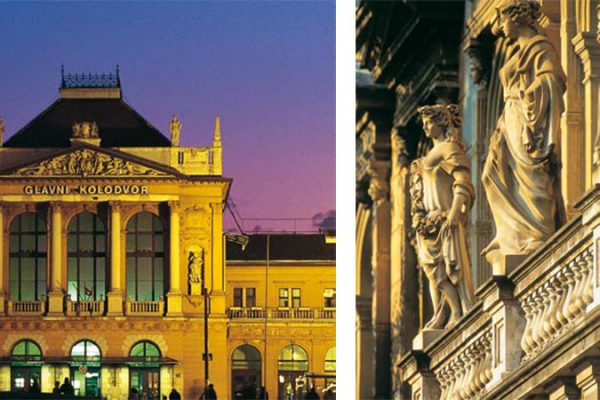 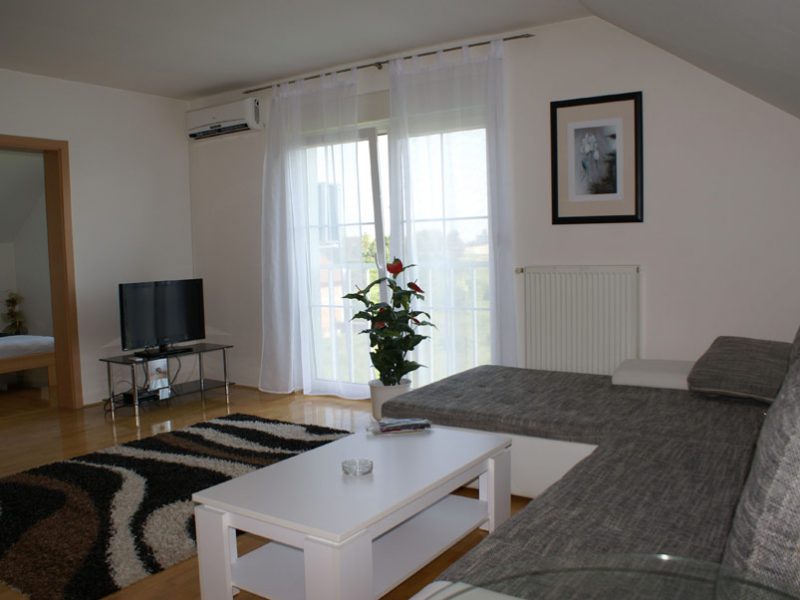 27€
We offer ideal private accommodation for tourists and business associates in the city of Zagreb, in a peaceful part of the city surrounded by greenery and only 10-15 minutes from the very center of Zagreb. The apartments are newly furbished, modernly equipped and impeccably clean, and they will offer you excellent comfort, rest and the…
Zagreb 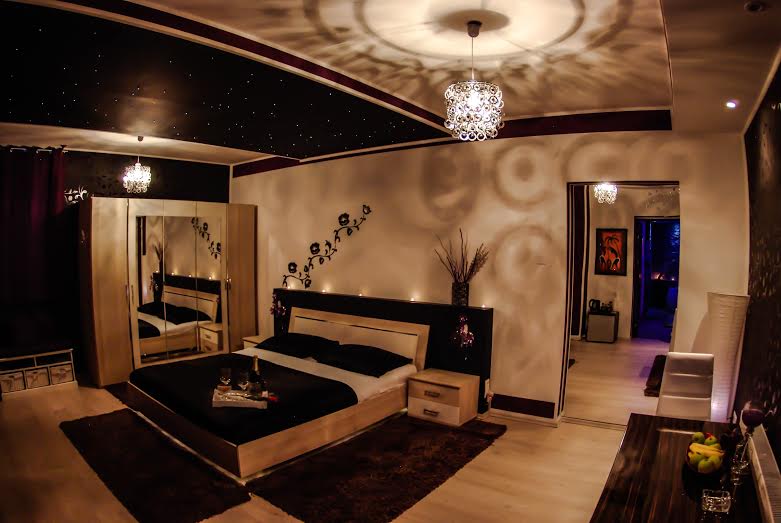